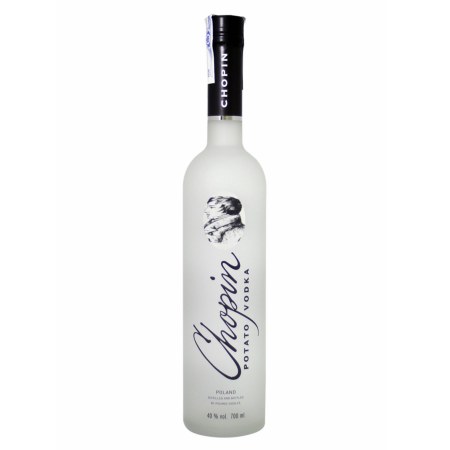 Chopin Potato Vodka reshaped western perceptions of vodka with its introduction to the U.S. market in 1997.

Tasting Profile: Chopin Potato has an alluring nose with subtle notes of vanilla and green apple. It is creamy and well-rounded with a reassuring earthiness and a long, clean finish.

How to Enjoy it: Chopin Potato is an excellent base for cocktails; served neat or on the rocks, it is unsurpassed. Try it in a CEO: a Chopin martini with extra olives.

Awards: Chopin Potato’s singular taste has caught the notice of connoisseurs and critics alike. It is consistently rated at the top of its class, earning Double Gold in the San Francisco World Spirits Competition and Gold Medals from the Chicago Beverage Testing Institute’s International Review of Spirits Award.

Production: Produced only from mid-September into early December, Chopin Potato is crafted from potatoes grown naturally, without chemicals or pesticides, by select local farmers in the fertile Podlasie countryside. These are harvested late in the season to ensure an exceptionally high starch content (22% vs. the average 12%), for a richer, more flavorful vodka.

There are no secrets and no additives in the creation of Chopin Potato. Each bottle contains only potatoes, yeast and purified artesian well water. These three ingredients - simple but superior in quality - are transformed into premium vodka through a method that has changed little over the centuries, including the use of a traditional copper column still.

Approximately 55 tons (or 50 metric tons) of potatoes are processed each day at the historic Chopin distillery. As many as 40 potatoes (seven pounds/three kilograms) are required to make one 750ml bottle of vodka. Cleaned and left unpeeled, the potatoes are pressure-cooked to create a mash, which is fermented for three days. The fermented mash is distilled four times, creating a spirit that is almost 100% alcohol. This spirit is then transported to Chopin’s bottling plant in nearby Siedlce, where it is blended with artesian well water and filtered five times before its final destination the iconic, frosted bottle that bears the profile of the brand’s inspiration, Polish composer Frederic Chopin, and the signature of master distiller Waldemar Durakiewicz.