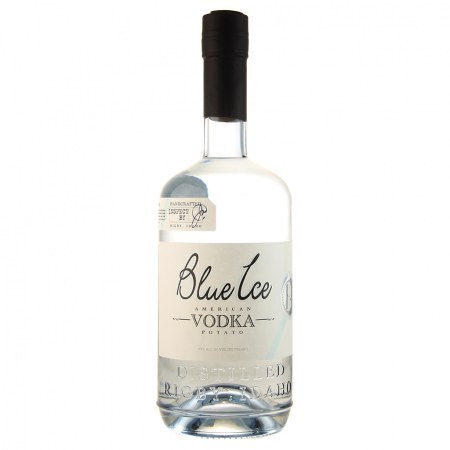 Blue Ice Vodka was rated the #1 American vodka in 2003 by the Beverage Testing Institute in Chicago; with 93 points. America’s finest potato vodka can only come from one place –Idaho– home to the luscious Russet Burbank Potato. Idaho is the true birthplace of Blue Ice Vodka; it is where the people behind the brand come from and live; where the natural ingredients are sourced and where the product is made. Contrary to popular belief; less than 3% of all vodka produced worldwide is made from potatoes. This is because a greater investment in premium ingredients; skill and effort is required to produce vodka from potatoes than from grain. It takes 9 1/2 pounds of potatoes to craft each bottle of Blue Ice Vodka.   The potatoes used in Blue Ice Vodka come from the richest potato-growing region in North America; where high-altitudes; warm days and cool nights; and light volcanic soil produce high quality potatoes with excellent taste and character. Idaho Russet Burbank Potatoes give Blue Ice Vodka its distinctive flavor and smoothness.